"Higher Ground" is a 2011 film directed by and starring Vera Farmiga.  It is adapted from the memoir "This Dark World" by Carolyn S. Biggs.

Those preferring that their Christian themed films follow the lead of "Facing the Giants" or "Courageous" may find "Higher Ground" to be lacking.  It is likely that many Christians would find the film to be largely about a woman's journey from saving faith as a child to abandoned faith as a disillusioned wife and mother of three.

However, I found the film to be a very fair depiction of Christian community in a hippie generation "Jesus Movement" church (patterned after a style of church that emerged in the late 60's and early 70's).

Farmiga plays Corinne, who is "saved" in church as a child in the 60's.  The film starts there and takes us on her spiritual journey, from her wayward teen years (that result in a shot-gun wedding) to her baptism in a lake as a newly married young woman.  Though there is an interesting subplot about the squelching of women's' voices in the evangelical church, the majority of the story centers on Corrine and how she navigates life and faith in the 70's hippie church.  It is in this setting that her crisis of faith begins to emerge.  Tragic situations with wayward siblings, sick friends, and a troubled marriage bring Corinne to a critical moment in the film where she stops singing "It is Well With My Soul" with her fellow parishioners.......it is clearly NOT well with her soul at that moment.

It is at this point that a lesser film would put Corrine in a 70's "I'm ok, you're ok" self-actualization mode and conclude that ultimately the notion of Jesus and a higher power is more destructive to a person than positive.  Corrine starts down that path, and has a real opportunity to abandon her family and "go find herself".  The conclusion is not as heavenly and sappy as "Courageous", but neither is it as cynical or preachy as many secular films are about the perceived hypocrisy and hogwash in the American church.

If you liked "The Apostle" (Robert Duvall).........you'll enjoy "Higher Ground".  It's a fair portrayal of church life, and the protagonist "keeps on believin'" through it all.

We have a tradition in our family at Christmas that we started about 5 years ago.  Each year, without exception, we sit down and watch "The Family Man".  The Family Man is a glimpse at what life could be like if we were able to celebrate the small things, and appreciate what we have.  It's a wonderful film - treat yourself if you haven't seen it.  If you have, you know exactly what I'm talking about.
The Super Bowl commercial above is a glimpse of a different sort.  It's a visual of what is happening in Hebrews 12:1 - "Therefore, since we are surrounded by such a great cloud of witnesses......let us run with endurance the race that is set before us..."  This is what is going right now folks.  As we grind it out in our day-to-day, seemingly mundane Christian lives, we've got confetti cannons and fans going nuts - cheering us on - from a heavenly place.  It's true, it's real, in your life, in mine - right now.  Be encouraged - the God who is delights in you - and he's brought a pretty big entourage to the party to cheer you on in the arena of your life.............we know this by faith now, but there will also come a day when this awesome glimpse won't even compare to our sensory experience.
Posted by Howie Espenshied at 8:01 AM 2 comments: 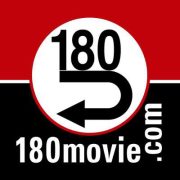 For my inaugural post on this blog, I'll put out some thoughts on the 180 movie - an interview style documentary done by Ray Comfort.

The 33 minute web-based movie consists almost entirely of Comfort doing "man on the street" style interviews with mostly 20 somethings on the subject of abortion. The 180 website, and Comfort himself, claim that the interviewees in the film do a 180 on their view on abortion after they have considered the argument that Comfort asserts. During every interview, the person says initially (or alludes to the fact) that he/she is "pro-choice", but then says, at the conclusion of the conversation with Comfort, that he/she has changed his/her mind, or has done a "180" on the subject.

To his credit, Comfort does a great job at coming across as winsome and approachable with each interviewee, even if he tends to lecture more than interact. Comfort's argument (which he goes to great length to explain to each person) is not new to the pro-life position, but it highlights an obvious contradiction. His approach has three parts. First, he skillfully gets each person to say that they would not have stood idly by while Jews were being exterminated in Nazi Germany - if they were around then to do something about it. Next, (and most important) he asks, (paraphrase) if it's even remotely possible that an unborn child is a human life, should we not have the same desire (as we admit we would have for the WWII Jews) to intervene when we see those (at least potential) lives slaughtered in vast numbers? Every person interviewed answers with some semblance of "of course we would." Third (in each case) he asks them what their position is on abortion. Without exception, each one says that they are pro choice, to which Comfort responds "knowing what you know now, has your position changed?" In every case - 6-8 in total, the answer is yes. Hence, they have done a "180" with their view on abortion.

Have they? I'll answer briefly with my opinion here, but I'd like to hear from other folks.

Can a person with a pro choice position do a 180 on the abortion issue if they already acknowledge that an unborn child is a (at least potential) human life? No. They can augment their position after being presented with a contradiction in their view. That's not a 180, that's an adjustment.

The true 180 (from choice to life) on the abortion argument involves much more. The true 180 occurs in the person who previously believed that life does not begin until (a) viability (now believed to be a gestation period of at least 20 weeks) or (b) birth. This is where the pro-life argument is won or lost. I consider myself pro-life, but I'd much prefer a movie that challenges folks on their "when does life begin?" position.

To be fair, if Comfort's goal is to garner more litmus test voters for the pro-life candidate - he wins, big. The movie is potentially very effective at accomplishing this. But lets call it what it is, a (very necessary) augmentation of a contradiction that resides inherently in many folks who "say" they're pro-choice.

Epilogue - more can be said about Comfort's gospel presentation at the end of the film, which I found to be perfunctory and distracting........perhaps for another thread.
Posted by Howie Espenshied at 1:34 PM 4 comments: